much explored, but it is definitely deserving of the attention. If you only have a couple of weeks to cruise somewhere from Vancouver or Victoria it is certainly worth making the trip. Desolation sound is brimming with emerald forest, waterfalls plunging into the sea, warm glassy lakes, and high rugged mountains, not to mention bizarrely warm and lovely sea water. The larger Islands in Desolation Sound are East and West Redonda, and Cortez Island. Cortez has a small resident population and is known as a bit of a hippy haven. Desolation sound has been home over the years to some interesting characters attempting with varying success to escape civilization. Grant Lawrence’s book Adventures in Solitude: what not to wear to a nude potluck, is an excellent read and an colourful description of the area and it’s history. Other than these characters Desolation sound is a lush and largely unpopulated wilderness with only a scattering of cottages.

The sound famously acquired it’s name from a terribly depressed Captain George Vancouver, who at the time was attempting to locate the much quested for Northwest

Passage but failing miserably, every countless long and winding inlet terminating in the coast mountains. Desolation sound is known for extremely wet weather in the winter and I can imagine how foreboding the rocky coast and looming, thickly forested mountains must have felt. However desolate it seemed to them then, on a sailboat in the summer it is quite idyllic. There are many beautiful protected anchorages and the water is the warmest on the BC coast.

One challenge is that the wind can be very unpredictable and light during the summer. You’ll want to be sure that either your motor is working well, and/or you know how

to fix it and have spare parts (as we were thankful for). Because you won’t always be sailing, unless you like not moving. This was sometimes a challenge for us as we like to avoid motoring as much as possible. Another challenge to the adventure seeker is that in the summer it can actually become very busy with boats in many of the most popular anchorages. Friends of ours have avoided this by going in shoulder season in the fall. We could only go in the middle of the summer when we had time off work and family visiting. It was in fact busy with boats in some anchorages, so we avoided the most popular spots of Prideaux Haven and Grace Harbour for this reason. We had six people in our crew on that trip, and we really only comfortable sleep four on the boat, so we also had the intention of finding anchorages that provided a spot of flat ground for pitching a tent.

Our favourite anchorage on this venture was Teakern arm of West Redonda Island. In Teakern Arm, if no one else has beat you to it, you can anchor at the bottom of the

spectacular waterfall that is Cassel Lake pouring over a cliff into the sea. There were only a couple of boats in there when we arrived. We chose to stern-tie to the rocks to the left of the waterfall. We spent ages picking juicy red huckleberries, swimming in clear and deep Cassel lake, and swimming in the warm sea. We even managed to get behind the main curtain of the waterfall and sit looking out, though it was rather rough on the head and a bit hazardous, it was definitely fun. Harry’s sister Georgia had a birthday when we were there, so there was a huckleberry and salal birthday cake baked in our oven. We managed to find a sufficient flat area for a tent as well. We stayed here for several days before moving on.

One memorable day we were happily motoring up a narrow channel between islands into a very light breeze, when Harry stated in a calm but serious voice “There’s water coming in”. I went down below and saw 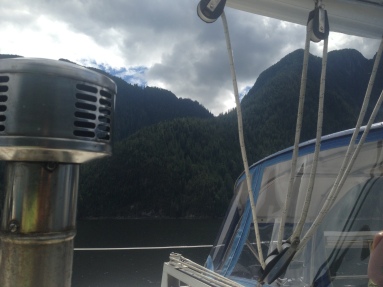 that there definitely was water coming in. It was pouring in, from the engine compartment quite rapidly. It didn’t take much snooping around the figure out that the raw water pump for the engine had blown and was now angrily spewing sea water inside the boat. We immediately shut off the engine, hoisted sail and began tacking back and forth up the channel while Harry and his dad Richard started examining the problem, head first in the dark pit of the engine room, legs sticking out. The rest of us sailed the boat ever so gingerly back and forth up the channel, hoping we could eventually make it out of the channel and to Roscoe Bay before

the wind completely and utterly died. While this was happening I was envisioning myself finding a boat going to Lund, hitching a ride, ordering a pump for our engine and waiting it out till it was mailed to the general store while the boat and everyone else would be stuck in Roscoe bay with no wind and no engine. I had almost resigned myself to this, when Harry emerged from inside covered in grease and smiling. He had found a raw water pump in a box of spare parts! Bless the previous owner of Mamaku for being prepared! About 45 tacks up the channel and a while later, the pump had been installed and we motored into the beautiful Roscoe bay.

We are a young Kiwi-Canadian couple with a dog called Woody. We are sharing our experiences of sailing and living aboard, and hope to show how accessible such a life style can be on even the tiniest of budgets. If you're interested in the idea, or would like to follow our adventures, this blog is for you! We are presently based in the Salish Sea (Vancouver Island, BC) traditional Songhees and Lekwungen territory, and are exploring further and further afield. We endeavour to set sail for NZ and beyond in the years to come.
Follow Mamaku Sailing on WordPress.com
%d bloggers like this: